It's a wine theme!

This year has been interesting one, as far as the variety of barn quilts that I've done.  I received a request from Tracey in Sturgis, KY, asking if I could make her a 2x2 barn quilt for a friend of her's who was in the hobby of making wine.  Tracey wanted to know if I could put a wine bottle and two wine glasses in the design.  As you know, most of my barn quilt, or for that matter, the majority of barn quilts that are made usually replicate existing quilt block patterns.  I told Tracey I would see what I could do and let her know.  I searched the internet for quilt pattern that had a wine bottle and/or wine glasses.  Surprisingly, I did find one, however with only one wine glass, and sent Tracey the link to the pattern.  She approved the pattern and was hoping that I could still do two glasses.  I told her that wouldn't be a problem.

I started working on the draft for the pattern, when I received another email from her.  She wanted to know if I could also add the name on the bottle, which was Fowler Family Wines.  I told Tracey that I wasn't very good at calligraphy, but, I would see what I could do.  She didn't care if it was block letters or whatever.  She really wanted the name somewhere on the barn quilt.

Laying out the pattern and painting the background commenced.  Here's the first photo of the process.  It shows the wine bottle and two glasses. 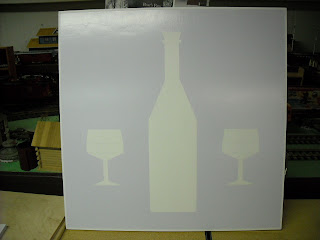 The next photo shows the wine glasses painted and the bottle and the area for the label taped off and ready for paint.  It's interesting to note that the color used for the wine in the glass is called 'Madeira Red'! 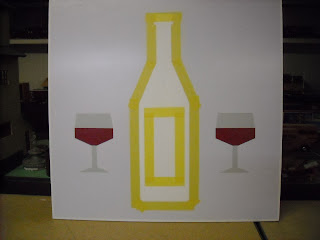 The next photo shows the bottle and label area painted. 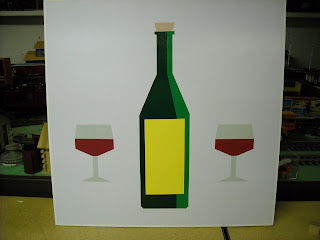 Before I made to attempt to work on the lettering, I began to dress up the board with grapes in the upper corners to fill in the large empty space.  I found a grape line drawing on the internet, printed out the drawing and then traced it onto the board.  I then finished painting them.  The wine themed barn quilt was now taking shape. 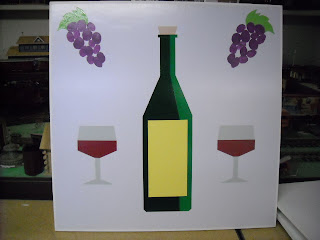 Judgement day finally arrived.  I had to start working on applying the name to the label.  I turned to my MSWord program and found an appropriate font to use, then size it up to fit the space within the label.  Once I decided on the proper font and size, I traced the lettering onto the label.  Using the newest Sharpie pens, called 'brush tips', I filled in the lettering and this is the result.  I was quite impressed!!!!! 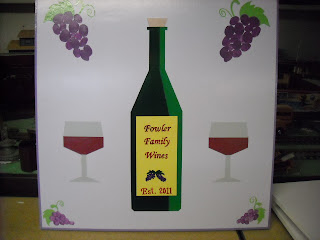 As expected, Tracey was very pleased and can't wait to receive it.  I will post a photo of the barn quilt hanging at it's new home as soon as I receive it.